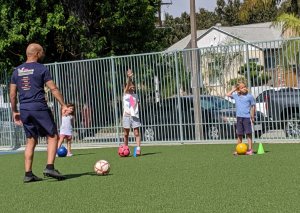 Coach Jamil has been playing soccer his whole life but really became a student of the game in his 20’s. He has a BA in Economics and Political Science from Bates College and eleven years experience in finance and software consulting. Looking to do something fun on the side, he got his first coaching license in 2013 and has since worked with several youth development academies around the country.

He is also a licensed referee, with experience at amateur, club, high school, and college levels. A few years ago he quit his desk job and decided to ply his trade in the two things he loves the most; soccer and acting. As an actor, he has worked primarily in professional Shakespeare productions, where he often engages in choreographed stage combat such as sword fighting. He is very happy to be working and learning with JMG where sport and art are being taught with a holistic approach to early childhood development.